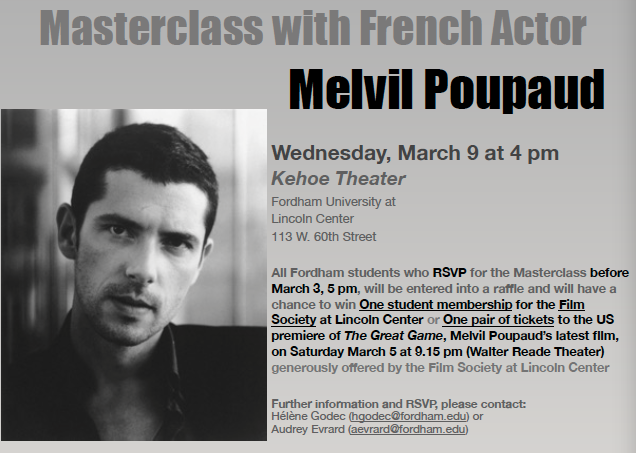 In over 20 years, French actor Melvil Poupaud, now in his early 40s, has built a unique, original career, acting in over 60 films and choosing roles that continuously resist typecasting. From Eric Rohmer to Raul Ruiz, François Ozon to Xavier Dolan, to mention only a few, Poupaud has worked with several generations of auteurs. His partners on screen have included Catherine Deneuve, Chiara Mastroianni, Matthieu Amalric, Romain Duris, Parker Posey, Suzanne Clément, and more recently Angelina Jolie and Brad Pitt. Looking back at his remarkable international career, Poupaud explains that not being a star has in fact been a blessing in the sense that he never had to meet expectations set by the media or audiences. In 2015 alone, he appeared in several movies, including The Great Game (directed by Nicolas Parisier), premiering March 4 in New York during the Rendez Vous with French Cinema festival at the Lincoln Center, Face Down (Kamen Kalev), Mad Love (Philippe Ramos), By the Sea (Angelina Jolie) and The Lady in the Portrait (Charles de Meaux), a Franco- Chinese production.

In addition to being a busy actor, Melvil Poupaud has also directed several short films, released musical albums, and published Quel est Mon noM?, in which he searches through personal and filmic memories and tells us what it meant to come of age through cinema.

Join us for what promises to be a fascinating conversation with an actor who first set foot on a movie set the he was 11 years old. Hélène Godec, an actress, who teaches French theater at Fordham and Audrey Evrard, Assistant Professor of French, will be moderating the masterclass.

All are welcome! The masterclass will be conducted in English.

This free public event is sponsored by the Department of Modern Languages and Literature at Fordham University in collaboration with the Unifrance and the Film Society at Lincoln Center.