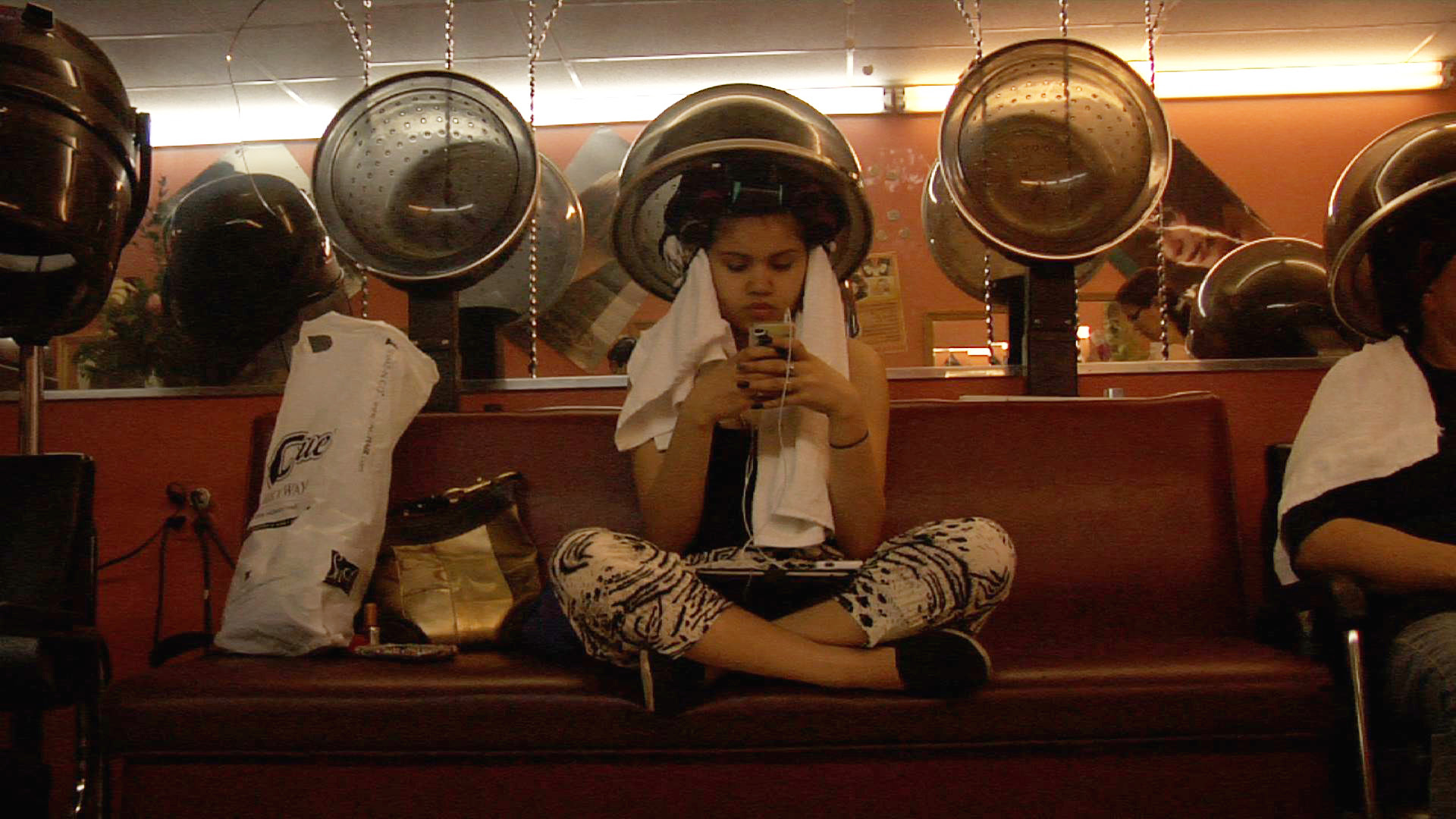 The co-founders of WOMAN WITH A MOVIE CAMERA (from5to7.com), a global platform committed to increasing the visibility of trans/cis women and all genderqueer/trans people, present the first NEW YORK FEMINIST FILM WEEK. Taking intersectional and transnational feminist approaches to interrogating cultural constructions of gender, sex, race, and class, our program aims to foster critical dialogue among filmmakers and the general public. Organized around the theme of feminist film genealogies, the program asks the following questions: What might a genealogy of feminist film look like in its politics and aesthetics? Does the practice of feminist filmmaking produce particular forms of knowledge? How does feminist filmmaking work to unsettle Islamophobia, racism, sexism, misogyny, transphobia, and stigmas around sexuality, illness, and dis/ability?

Inspired by feminist film weeks in London and Berlin, the NYFFW focuses on the social and material aspects of film, placing feminist film production within specific historical and geographical contexts while also creating connections among films, filmmakers, cultures, and audiences across space and time. This year’s program pays homage to feminist film pioneer Barbara Hammer and explores the theme of feminist film genealogies through seven film programs and a roundtable. NYFFW’s line-up celebrates the intertextuality of film while recognizing the unique contributions of household names like Cheryl Dunye, Barbara Hammer, Agnès Varda, and Maya Deren, alongside new and emerging filmmakers.

PROGRAM 1: DISMANTLING ISLAMOPHOBIA
The screening will be followed by a panel discussion; participants TBA.

This program aims to promote discussion about Islamophobia by focusing on the particular context of contemporary France. A documentary about Christine Delphy, the rare feminist voice of her generation to come out against the law banning “ostentatious” religious symbols from public schools in France, screens alongside a fiction film about a French Muslim teenager who must choose between school and her headscarf during this law’s passing in 2004. Delphy, co-founder of Questions Féministes with Simone de Beauvoir in 1977, is an openly lesbian French sociologist and materialist feminist. Her book, Separate and Dominate, works to dismantle the following interconnected issues: discrimination against LGBTQ+ folks, misogyny, Islamophobia, and racism in the French postcolonial context. The documentary about Delphy thus helps to contextualize the fiction film MARIAM, which addresses the themes of Islamophobia, the diversity of the Muslim experience, and the assimilation of Muslims in the West.

The International Women’s Day BODIES program looks at the body as a locus of cultural and political practice within contexts of violence, pleasure, and community. With still photographs that pay homage to Eadweard Muybridge, WALKING WITH FREDERICK DOUGLASS, LISPENARD ST retraces Douglass’s steps of freedom, based on a quotation that places him at the exact location of Church and Lispenard Streets. ALL THAT SHELTERING EMPTINESS is a meditation on elevators, hotel lobbies, hundred dollar bills, the bathroom, a cab, chandeliers, cocktails, the receptionist, arousal, and other routines in the life of a NYC callboy. In UNTIL JUSTICE ROLLS…, butch dyke superhero action figure Faggotgirl and her friend creatively navigate the barriers of the NYC public transportation system. In CARNAL ORIENT, a cook serves up exotic dishes to his impatient, hungry guests, as the arrival of a mysterious Asian woman reignites their insatiable appetite. Filmed within one week after the Pulse nightclub shooting, WHOLESOME FEVERS is a feminist analysis of mourning within the emotional exile of social exclusion. BLACK IS BLUE tells the story of an African American transman who is forced to confront his pre-transition past, struggling to make his outside match his inside.

TRANS LIVES MATTER! JUSTICE FOR ISLAN NETTLES, which begins our International Women’s Day TRANS/ACTION program, documents a community vigil for a transwoman of color, capturing the love and support of a community brought together to sustain each other. MY REFUGEE STORY was directed and produced by an LGBTIQ youth group, members of which share their firsthand experiences as women with non-conforming gender and/or sexual orientations living in Lebanon. KATE BORNSTEIN IS A QUEER AND PLEASANT DANGER is a documentary about trailblazing gender outlaw Kate Bornstein, who takes viewers on a mind-bending quest to dismantle expectations about gender and seek answers to the age-old question: What makes life worth living?

QUEER ECOLOGIES uses stop motion animation and text to render questions about the current state of humanity by posing questions to a long-revered pseudo-mystical being: a mushroom. GOODBYE GAULEY MOUNTAIN chronicles the adventures of Beth Stephens and Annie Sprinkle, two ecosexuals in love raising performance art hell in West Virginia to help save the region from mountaintop removal destruction, climaxing with their wedding to the Appalachian Mountains.

In 1946, Maya Deren booked the Provincetown Playhouse in NYC to show her program titled “Three Abandoned Films” for several evenings. The FEMINIST FILM GENEALOGIES program places that historical film event in the context of wider filmmaking and exhibition practices, finding connections among generations of feminist filmmakers who engage with and expand the language of experimental cinema. Barbara Hammer’s MAYA DEREN’S SINK explores Deren’s concepts of space, time, and form through visits and projections filmed in her L.A. and N.Y. homes. Incorporating Deren’s aesthetics and inspired by Hammer, Patricia Silva’s SELF AND OTHERS is a formal study of some of the earliest modern images of bisexual culture, and its complex structure of recognition. Agnès Varda’s L’OPÉRA MOUFFE is the visual diary of a pregnant woman in the rue Mouffetard neighborhood of Paris; it influences Constanza Mirré’s ROSEMARY’S STREET, which offers a glimpse of life in a Dominican community still living on a few non-gentrified blocks in Williamsburg, Brooklyn.

This program pays homage to queer cinema pioneer Barbara Hammer in the context of the theme of feminist film genealogies by placing two of Hammer’s films beside a work by her mentee, Joey (formerly known as Gina) Carducci, and a film they made together. Hammer’s DYKETACTICS articulates lesbian desire and sexuality through the physicality of the female body and the materiality of the film medium. NITRATE KISSES weaves striking images of four gay and lesbian couples with footage of an unearthed forbidden and invisible history. In A VIDEO LETTER TO BARBARA HAMMER, Carducci comes out as transgender to Hammer, his mentor and friend, placing transmasculinity in the context of feminist and queer politics. Their collaborative film, GENERATIONS, is about mentoring and passing on the tradition of personal experimental filmmaking. Hammer, 70 years old, hands the camera to Carducci, a young queer filmmaker. As they shoot during the last days of Astroland at Coney Island, the filmmakers find that the amusement park architecture and the emulsion of the film medium itself echo the inevitable fact of aging.

This program pairs two feminist animators who explore women’s sexuality and mental illness without bounds. In Joanna Rytel’s claymation film, MOMS ON FIRE, two pregnant women find much needed relief in each other, while in Signe Baumane’s BIRTH a young woman afraid of giving birth becomes even more frightened when she seeks advice from older women. Baumane’s ROCKS IN MY POCKETS is based on true events involving five women in the filmmaker’s family, including herself, and their battles with depression and suicide. The animated feature raises questions about how family genetics determine who we are and if it is possible to outsmart one’s own DNA. It is an animated tale full of art, women, strange daring stories, Latvian accents, history, nature, adventure, and more.